Sunderland missed the chance to second in the League One table yesterday as they were beaten at home by MK Dons.

Phil Parkinson’s side took the lead in the 12th minute when Max Power hammered home from the edge of the area, but they looked far from assured. Four minutes later, former Middlesbrough man Cameron Jerome headed home to level.

The home side looked shot-shy and early in the second half, Power gifted MK Dons the lead. He brought down Scott Fraser in the area, who dusted himself down and sent Remi Matthews the wrong way from the spot.

Will Grigg missed a glorious chance to level late on in what many Sunderland fans saw as a horror show of a home performance. Worse was to come after the game, as in a now-deleted tweet Jerome lashed out at the Black Cats. 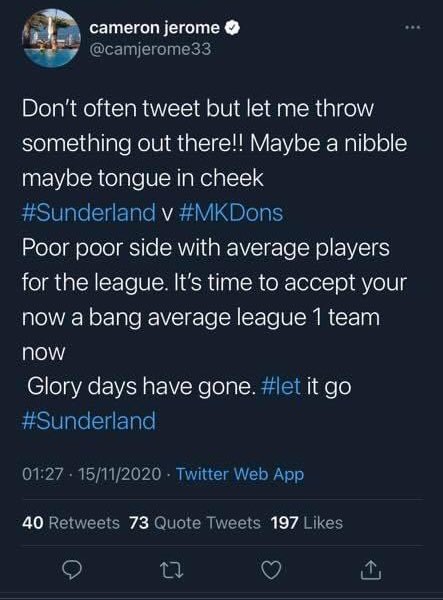 He claimed his comments were ‘maybe’ tongue-in-cheek, but that the former Premier League side were now a ‘bang average’ League One team with ‘average players’. Whilst that sort of attack might see some adverse reaction, there has also been a certain amount of apathy from Sunderland fans.

They reacted with a complete lack of surprise over the former derby man’s comments, remarking that he was only saying what a number of them are seemingly thinking. The best of their replies can be found below.

Have you tried our latest Sunderland player quiz?

Not sure who he’s aiming the message at. Most Sunderland fans know this, we have also accepted where we are but it doesn’t mean the fans have to settle for that. We want more and we want better and make no apologies for this.

Below average a lot of the players. There are some good players in the squad that a good manager would get the best from especially if bringing younger players through too. Sadly Parky is a stubborn manager with no plan b which the opposition exploit.

Haha he says that now but before the game they would of seen it as their cup final for the season ?

I don't think it's his job to assess the quality of his fellow professionals ?

Getting Grieved by a average striker at best next played in England senior squad. What have we came to ??